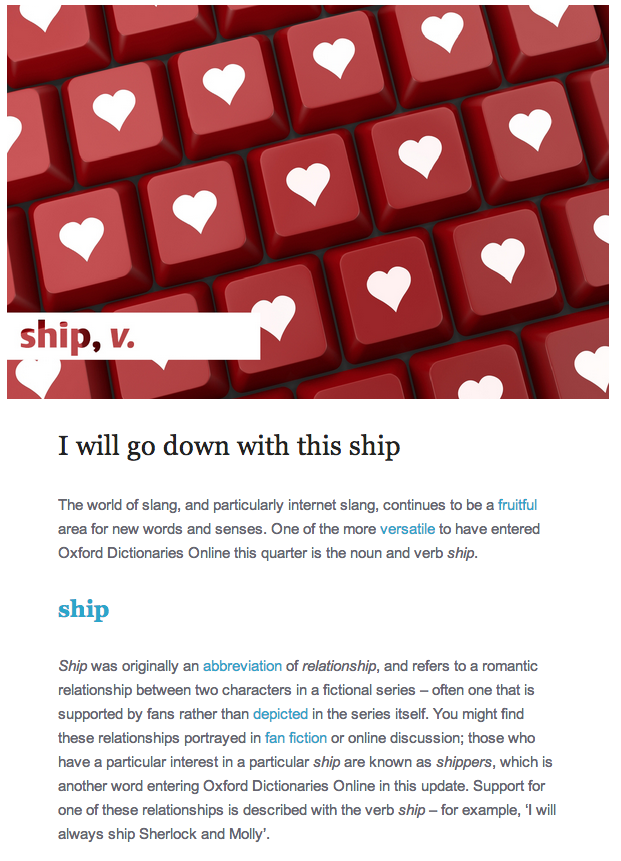 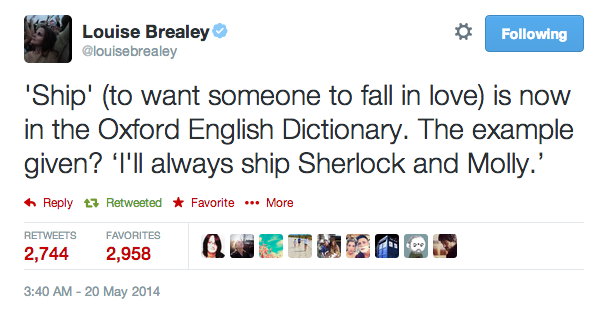 Not only did the Oxford English Dictionary add the verb “ship” in its quarterly update, their definition is spot-on; that's exactly how we've been using it since June of 2001. For some reason, though, we didn't include it in our 2002 glossary - possibly because we had already posted the definition in a pinned post in SCUSA.

Shipping is a general term for emotional and/or intellectual involvement with the ongoing development of romance in a work of fiction. Shipping can involve virtually any kind of relationship from the well-known and established, through the ambiguous or those undergoing development, and even all the way to the highly improbable and the blatantly impossible. People involved in shipping (aka shippers) assert that the relationship does exist, will exist, or simply that they would like it to exist.

We also note their use of lines from Dido's White Flag in their headline; at least three fics on FA use those lyrics:

It's interesting that the OED blog chose to illustrate it with Sherlock/Molly, which implies to us that whoever wrote that page is versed in the ways of fandom. It's inherently meta, as an example, because many view the BBC Sherlock as fanfic (or a fanfilm) of the Arthur Conan Doyle stories, which means that Sherlock/Molly is in and of itself a fan-created ship that is canon in one version of Sherlock fanworks, and is both an on-screen romance in The Empty Hearse but also not an on-screen romance in said episode as it’s only visually included in a story being told by a character.

In other words, kudos to you, OED, for including a fannish term, giving the fannish etymology, and wrapping the whole thing up in a perfect storm of English-story-centric meta.

Technically, they're longer than drabbles, but this Spring, J.K. Rowling herself is writing Quidditch World Cup reports. They're not in the third person, as the HP novels themselves are.

No, JKR is writing as Ginny Weasley Potter, and you can catch her updates and news reports from the Quidditch World Cup every day this week on Pottermore!

Fantastic Beasts and WHEN to Find Them: November 18, 2016

Warner Bros. has announced that the first Fantastic Beasts film penned by J.K. Rowling will be released in theaters on November 18, 2016.

That'll be over fifteen years since the paperback Schoolbook was first released, in support of the UK's Comic Relief charity. With the movie release about 30 months away, we still don't know who'll star as Newt Scamander, or whether the cast will include Young Dumbledore, Potter, Weasley, Lovegood, Malfoy or Black ancestors, or... much of anything else - though we do know the film will be set in the wizarding world of New York City.

Are you getting in line for a good seat yet?

Spoilers! A Sneak Preview of "Escape From Gringotts" at the WWoHP: Diagon Alley

It will be sometime this summer, though - will you be heading to Orlando to join thousands of fans in the Wizarding World?

We were going through our FA Draft Posts folder and realised that we'd never posted this gem from fandom history.
At Nimbus - 2003, most of the attendees signed a piece of foam-core board that one of the attendees had brought - and instead of signing our real names, or fandom names, most everyone signed with their LiveJournal usernames! That was the year that so much of fandom migrated onto LJ, if they hadn't already; Facebook didn't exist yet, nor did YouTube or Twitter - although MySpace did!
How many names can you find and recognize? Did you read their fics or posts on LJ or here on FictionAlley?
Heidi currently has this poster at her office, and may raffle it off some day, or keep it forever as a fantastic, self-contained archive of information and content.
Posted by Heidi8 at 20:32